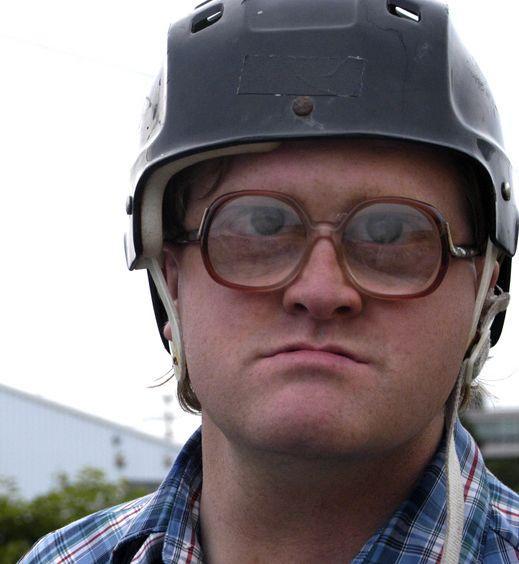 Bubbles (portrayed by Michael Smith) is an awkward looking denizen of Sunnyvale who has lived there all his life in sheds of various types. He is closely associated with Ricky and Julian as the three are seen to be best friends and cohorts.

Because Julian was tasked to look after him during his childhood,[1] Bubbles usually resides in a shed on whatever lot Julian is currently occupying. These sheds contain all the items he needs, including lavatory, a toilet and cooking facilities. Despite the cramped living conditions, he rarely lives in squalor. His belongings are keenly organized and clean; even when living in J-Roc's van for 12 bucks a month , he adapted it into a clean and efficient living space. He seems to have inherited his fondness for small living spaces from one or both of his parents; in the film Don't Legalize It, he inherits his parents' home - a refurbished school bus. Prior to this, he is seen living under J-Roc's front porch - yet he manages to turn even this into a clean and relatively comfortable living space.

Bubbles' original shed is accidentally burned to the ground after a complication with some electrical wiring Ricky had hooked up to cultivate some dope plants. For a short while after that, Bubbles rents J-Roc's van to live in until he can get a new shed.[2]Julian buys Bubbles a replacement shed once he returns from jail using his share of the money from the Airstream dope operation.[3]

Eventually, Bubbles turns his preference for shed-life into a business plan. He acquires several other sheds and decks them out to create "Bubbles' Shed -N-Breakfast", a retreat for those looking to spend vacation time with their beloved kitties.[4] These are unfortunately used for shag-shacks during Steve Rogers' bachelor party[5], which led to a crab infestation and then retooled to create a honey oil refinery for Julian.[6]

The only time we ever see Bubbles involved in any romantic pursuits for a human is in Countdown to Liquor Day when he falls for a cute employee of the animal shelter named "Jenny" while trying to get his cats back from impound. She lets him visit his kitties after hours, and he asks her out before he is carted away under arrest. [7] It is not known where the relationship went after that as Jenny is never mentioned again.

For a complete list of all of Bubbles' criminal activities, see the article Operations.

Bubbles didn't want to be doing certain things but felt he had to go in with the other two because they were the only family he had left. One of Bubbles's strongest character traits is his ethics or sense of right and wrong, which most of the other characters seem to lack. He is generally uncomfortable about doing things which are overtly wrong or hurtful to someone else.

The only exception to this is The Swayzie Express operation in season seven, which was basically masterminded by Bubbles himself after he stole the model locomotive from a train show in Maine. [8]

With a few exceptions, Bubbles is often spared being arrested or incarcerated,[9] (sometimes being protected by others), but it occurs more often as the series goes on.

Bubbles is an awkward looking fellow, with thick glasses, odd clothing, a sometimes hoarse and cracking voice, and a host of physical mannerisms which are unique only to him and his mom that left him. However, despite these shortcomings, Bubbles is typically seen to be very wise, if not intelligent from a scholarly viewpoint. Having said that, early on, he was shown to quote Plato and 'Catcher In The Rye', which seems to illustrate that at least some level of education is present in him. His odd appearance does not go unnoticed; occasionally, strangers unfamiliar with Bubbles seem to be put off by his unusual demeanor and looks. It is assumed that Bubbles endured bullying as a child, as he is very sensitive to being called a "googly-eyed bastard", and often expresses feelings of loneliness.[10]

His general demeanour and desire for peace finds him in the middle of tense situations in order to calm things down, or impart some personal wisdom to the parties involved, which is ultimately accepted. Most often the situation described above occurs at those times when Ricky and Julian are at odds, and Bubbles has to act as mediator.[11]

Bubbles is also quick to realize an opportunity when he sees it. He was responsible for the peace agreement between Julian, Ricky and Jim Lahey which he traded for a ringing endorsement of Jim at his police board hearing, leading to his reinstatement.[12] In season seven he was able to negotiate Ray's involvement in the sting operation to frame George Green and Ted Johnson, in exchange for then officer Lahey's erasing Ray's DUI record and getting back on the road to help in their scrap metal deal with Shitty Bill.[13]

However, Bubbles' relative positions in all of this are not without their drawbacks. He is a very emotion-driven individual, given his abandonment on July 1978, just at 5 years old. Events within the park often spin out of control, despite his efforts, and Bubbles is seen to become emotional many times, in forms of anger, sadness, fear and even brief periods of mental instability. This is especially prevalent in season 7 when Bubbles clearly teeters on the brink for several episodes until finally something breaks in him, and leads to the second appearance of Conky, his ventriloquist's dummy and alter ego.[14]

When Bubbles starts a sentence, or someone else makes a statement, he flicks his wrist up and points at nothing, or the person talking. He also does it in mid-sentence a couple of times.

Bubbles doesn't appear to have a proper first name (unless his parents actually named him this); instead, his name is based on his love of soap bubbles and a mechanical bubble making machine his parents left him.[15] Bubbles has also been said to be his actual and only name with none other (such as a surname) when he was taken to a hospital[16]

Bubbles adores cats and has taken it upon himself to care for all the stray kittens which hang around in the park. His cart operation's main purpose was to provide food and medical care for the 'kitties', and he doesn't stand for anyone interfering with this arrangement.[17] Bubbles even opened a cat daycare center in the park, which he called The Kittyland Love Center, and it managed to stay in business for a while.[18] His love of cats is so strong that he masterminds a plan to spring all of his captured animals from the animal shelter after they were rounded up and held for reasons of neglect during the construction of Lahey's Luxury Estates and the dismantling of Sunnyvale.[19]

He strongly believes Trevor and Jacob are aliens. In Jacob's case this belief is intensified after it is revealed that Jacob has an unknown element in his blood that gives him a severe allergic reaction to dogs and red skin.

Community content is available under CC-BY-SA unless otherwise noted.
Advertisement