Edit
This article is about Bubbles' puppet Conky. For the season 4 episode of the same name, see Conky (Episode).

Presumably as old as Bubbles' grandfather would be if he were still alive.

Sort of a dick

Conky is a ventriloquist dummy owned by Bubbles. When the boys were in Grade 6, Julian and Ricky had to confiscate Conky when its personality began to overpower Bubbles' own -- telling him what to do and so forth -- and so they threw him in a nearby swamp.

However, Conky was revived when Bubbles was afflicted with an infected tooth, and refused to go to the hospital. Julian surmised that the only 'person' he would listen to was Conky, so they rescued him from the swamp. Indeed, Bubbles began to take advice from Conky, but soon enough Conky moved out of Bubbles' control, to his own detriment.

Ricky made no secret of his deep-seated hatred for Conky; and Conky, for his part, taunted Ricky heavily, and several arguments and acts of violence occurred between them. During the course of this, Bubbles maintained that he had no control over what Conky said or did, and in the end, Conky taunted Ricky and Julian so much that Julian had no choice but to shoot Conky in the head, thus 'breaking the spell' he had over Bubbles.

That should have been the end of Conky, having been broken into a million pieces and replaced in the swamp, but during the events of season seven, while Bubbles was dealing with major stress over his involvement with The Swayzie Express operation, he took it upon himself (either consciously or otherwise) to once again get Conky from the swamp, rebuild him, and insert him into the situation.

This of course went badly, as Conky made it clear to Bubbles that he was in control. In fact, Conky was seen to be more active in his involvement in the latter stages of the operation than Bubbles (his own personality all but suppressed by this point), coming up with ideas, and bringing the boys barbeque meat while they were in the woods near the American border. But this was just a ruse -- Conky secretly contacted several different authorities regarding the activities of the group, all of whom converged on the boys in the last episode of the series proper. When Conky called Bubbles a "Googly Eyed Bastard" he drowned him in the river they were floating on while Ricky cheered him on.

Conky later returned in Hurricane Ricky as Conky 2.0, the son of Conky after Bubbles becomes stressed after one of his cats disappears during a hurricane. Conky continues to taunt Julian and Ricky but also helps, suggesting Julian use a table as a rudder and pointing out the corpses on the boat were rotting for a week before they arrived so they couldn't have killed them. Ricky eventually had enough of Conky and shot him.

It is heavily implied that Bubbles and Conky are separate entities, and that Bubbles doesn't have control over the actions of his dummy. He seems to obeseve things that Bubbles himself cannot, such as Spotting Mr. Lahey at Sam's clinic. He also knows things Bubbles does not. When he was first rescued from the swamp, Bubbles asked where he'd been and was worried he was dead, of which Ricky wishes. Conky then immediately comments he doesn't need to breath when he's underwater, something Bubbles did not know at all just a second ago. Further to this, it is also implied that Conky is indeed self-animated -- there are times when Conky speaks without Bubbles having to move his lips, and in a very specific scene, Bubbles carries on a conversation with Ricky and drinks a beer, while Conky speaks audibly to Julian at the same time. When Conky drops dime on the operation, Bubbles is clearly sleeping and out cold, but Conky still somehow manages to dial a phone and speak.

Conky has the innate ability to find just the right button to press to completely piss someone off. He frequently calls Ricky 'Reveen', and Julian Patrick Swayzie, and mouths off to just about anyone he can. Conversely when he is confronted with retaliation he puts on a sweet 'I'm just a dummy' act in order to get out of it.

Conky wears thick lensed glasses just like Bubbles, and a brown sweater with his name on it.

Conky later appeared in video form during The Drunk, High, And Unemployed Tour, the premise being that Conky was messing around behind the scenes, affecting the performance. It's not clear how he made his way back to civilization from the American border after being submerged there.

During the Out of the Park series, when Bubbles is singing "Stayin' Alive", he coincidentally sounds like Conky when hitting high notes. Ricky instantly assumes Bubbles is doing that on purpose to annoy him. Though Bubbles claims that isn't his intent, he starts to act just like Conky - even to the point where he becomes rude and insulting to Ricky, as if the voice itself "overtakes" Bubbles without Conky even being present.

Conky is also the name of a piece of system monitoring software for Linux, BSD and X. They state that they took the name of the program from the show, and a picture of Conky is their logo.

While there's some slight inconsistencies to Conky's origins (such as Bubbles making it, or his grandfather making it), Conky is clearly modeled after Bubbles likeness. The doll bears a similar hair style, glasses and in his first appearance was wearing the same shirt that Bubbles had on.

Conky being drowned by Ricky, being shot by Julian , and being drown by Bubbles, Conky is the only character to die three times in the series, if any of them actually killed him. 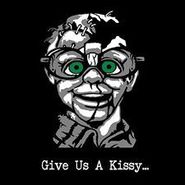 Bubbles with Conky 2.0.
Community content is available under CC-BY-SA unless otherwise noted.
Advertisement