Bubbles, Ricky and Julian work on shopping carts; their latest idea is to transport the hash by forming them into rods and hiding them in the handlebars of the carts.

Ricky fixes the brakes on the shitmobile so it's safe for Trinity to drive. He is looking forward to bailing his dad out of jail. They are running low on carts and Bubbles is tasked to go and steal some more, so they drop him, his go-cart and his trailer off at the mall.

While taking the film crew on a tour of his stealing grounds, he is spotted by Gary the mall cop and he is called out. Gary rants to him for a few minutes and then forces him to leave the mall, upsetting Bubbles in the process.

Back at the park, Jim Lahey drinks like crazy and says he will continue to up the price on Julian's trailer so he has to continue doing crimes to buy it back. Randy hopes Jim will stop drinking after his plan succeeds. At the vocational school, Ricky continues to take hash orders from the students. Lucy and Sarah make plans to get drunk later, they ask Cory and Trevor to watch Trinity, but they say they are working for Julian.

Bubbles returns with his cart haul and tells Julian Gary gave him a hard time. Julian complains that Ricky is spending the hash money on booze and smokes. Julian also returns to the mall and forces Gary and the security force at gunpoint to round up carts and tells them to leave Bubbles alone.

Lahey and Randy secretly watch Ricky messing around with the driveway. Cory and Trevor steal a truck. Lucy asks Ricky to watch Trinity, and he says he will, but wants to get drunk with Lucy later and pays Sarah to babysit that evening. Ricky and Trinity do body work on the shitmobile.

Bubbles returns with a motherlode of carts, while Lahey and Randy watch from behind a bush. Trinity borrows the shitmobile from Ricky to go to the store. Ricky faces off with Cory and Trevor when he makes a mistake in assembling one of the orders. There is a minor fight between them, which Julian breaks up. Ricky apologizes. Julian sends Cory and Trevor in the truck to haul the carts to the drop point for pickup by the buyer.

While driving to the store on the main roads, Trinity is pulled over by Ted Johnson.

Lahey and Randy attempt to do 'a lot water test' on Ray's lot, and they are told to go away. Randy takes off his pants and starts a fight with them while Lahey dares Ricky to punch him. Before any damage can be thrown, Lucy runs up and tells Ricky Trinity has been arrested.

Ricky flees to Johnson's patrol car and finds his car is also being impounded—there are drugs and drug money still inside, but has not been discovered. Lucy tries to bribe Johnson with sexual favours, but fails and throws a drunken fit and is arrested. She and Trinity are taken away as Ricky laments his entire family is now in prison.

The boys try to figure out a way to get the car out of impound. Cory and Trevor return with gifts of smokes and food and then leave. Julian tries to console Ricky and tells him to keep focused.

"When you're growing up, you gotta do illegal shit once in a while, have a bit of fun and maturinate into a better person."

"Get me a couple bags of chips, dressed all over and zesty mordant." (he means 'all dressed' and 'zesty' -- probably Doritos. 'Mordant' is french for strong, and is written on the Dorito's bag of this flavour.)

"From a distance they look like ordinary flowers, Randy, but when you get right down and stick your nose in, you realize they're shit flowers and there's a whole fuckin' bouquet there..." 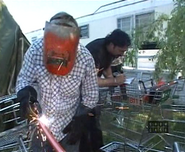 Bubbles and Julian work on carts for the hash operation. 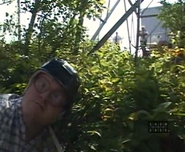 Bubbles hiding from Gary at the mall. 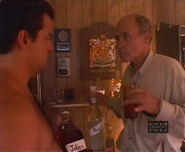 Jim shows off his liquor and tells Randy his plan. 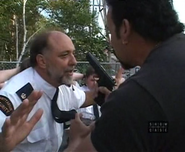 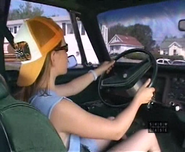 Trinity driving the shitmobile, just before getting pulled over. 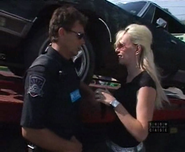 Lucy tries to bribe Det Ted Johnson with sexual favours.
Add a photo to this gallery
Retrieved from "https://trailerpark.fandom.com/wiki/Dressed_All_Over_And_Zesty_Mordant_(Episode)?oldid=11340"
Community content is available under CC-BY-SA unless otherwise noted.